You can not find what you're looking for? Call us and tell us about your case See all our productos

You can not find what you're looking for? Call us and tell us about your case See all our productos

Your cart already has the maximum possible stock for this product.   View my cart!

More than 70 years working in the mechanical sector for you

The history of our company is the history of a family that has dedicated with effort, passion and hard work to mechanics, the sea and its people.

Our story begins in Nules, with Ignacio Miralles Sanahuja “Nasio” and Rosa Roselló Martínez. The marriage formed by both settled in Grao de Castellón, meanwhile his son Pepe follows the bakery path, and the other son, Ignacio Miralles Roselló ould dedicate himself to the naval mechanics of the fishing boats of our village.

Both were the ones who continued with the nickname and the name, which today is already in his fifth generation.

The history of Talleres Nasio dates back to 1948

Our workshop has not always had the name by which it is known today. Talleres Nasio was founded in 1948, in the Grao de Castellón, with the name “Talleres Olmi”. Was founded by Juan José Olbiol and Ignacio Miralles Roselló “Nasio”. The name was the union of both surnames (Olbiol and Miralles), and was located in the warehouse of “Talleres Cortés”. 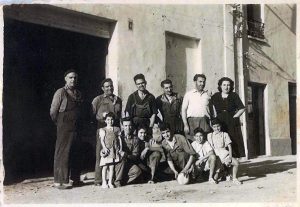 At the left, Ignacio Miralles. At the center, standed up, his son Ignacio and below him, his son Vicente, with the Olbiols and some neighbors, in the door of “Talleres Olmi”, nearby 1948.

It was in this workshop where the second generation of our family started to work, Ignacio Miralles and Vicente Miralles, sons of Ignacio Miralles Roselló “Nasio”, with Miguel Ramón Olbiol (son of Juan José Olbiol). The workshop was located in an old cow yard, “La vaquería de Cirilo” (a cowshed, today is Magallanes street in Grao de Castellón). They were there two years until they moved to Gravina street, in “El taller de la Fabada”. Both families were working together in that place until 1957, the year in which the two partners separated and went their separate ways. 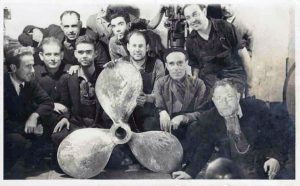 Year 1956, at the left of the propeller Ignacio (son) and above him, his father Ignacio Miralles “Nasio” along with other friends and neighbors of Grao de Castellón.

In 1957 Nasio and his children move to the installations of Pietro foundry, a workshop of a galician man, Eduardo Prieto, who left the city and they bought all the machinery he had, such as a lathe, a milling machine, a cut-off saw and some other things necessary for mechanical work. 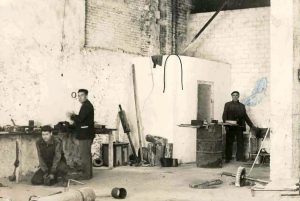 At the right, Ignacio Miralles Roselló “Nasio” and at the left his son Vicente Miralles with another worker, in the installations of Prieto foundry. 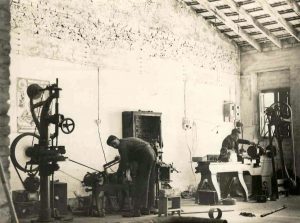 At the left, looking at the camera, Vicente Miralles, son of Ignacio, with Leandro.

There, Ignacio and his children laid the foundations of our company as a reference point for naval mechanics, together with Leandro, a lathe operator who worked with them for several years. This is where the current “Talleres Nasio” would begin.

In the 60s, they started to manufacture semi-diesel and diesel engines

In the 60s, in addition to repairing naval engines, Talleres Nasio also began to build them. They made around 24 engines for small boats in our town.

The first marine semi-diesel engine who manufactured Ignacio Miralles Roselló and his sons and Vicente was in 1962, it was and “estorí” that was installed aboard the light boat of the fishing boat “Lolín” (owned by the shipowner Vicente Boluda Martí, father of Mr. Vicente Boludas Fos, President of the Boluda Maritime Corporation). The engine had 750 rpm and 8 horsepower.

This engine is exhibited since 2010 in the Sea Museum in El Grao de Castellón and was donated by Vicente Boluda. 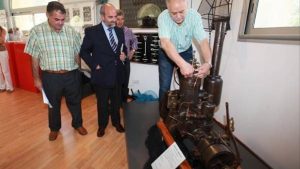 Vicente Miralles with the engine in the museum. Grao de Castellón, 2010. 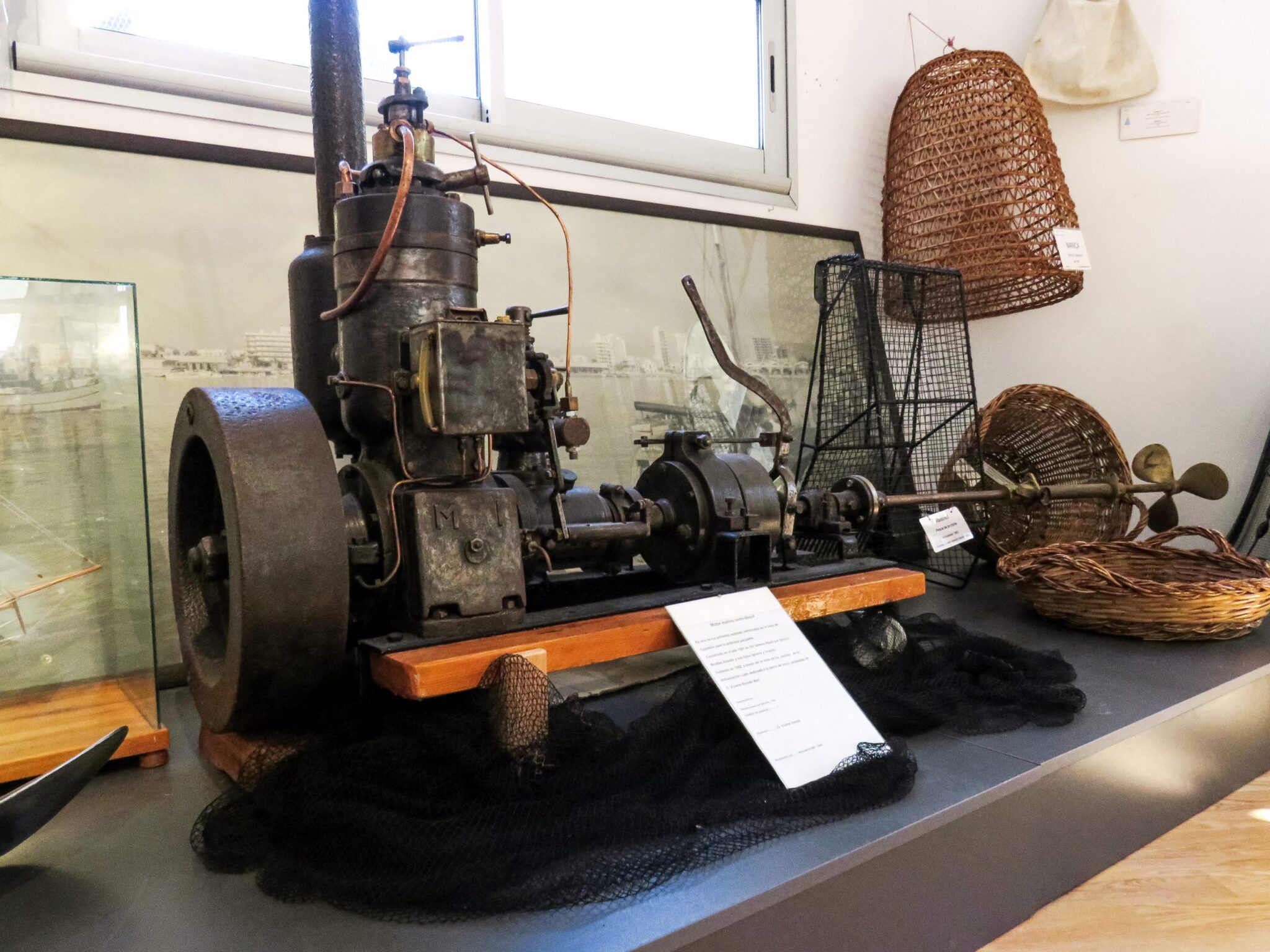 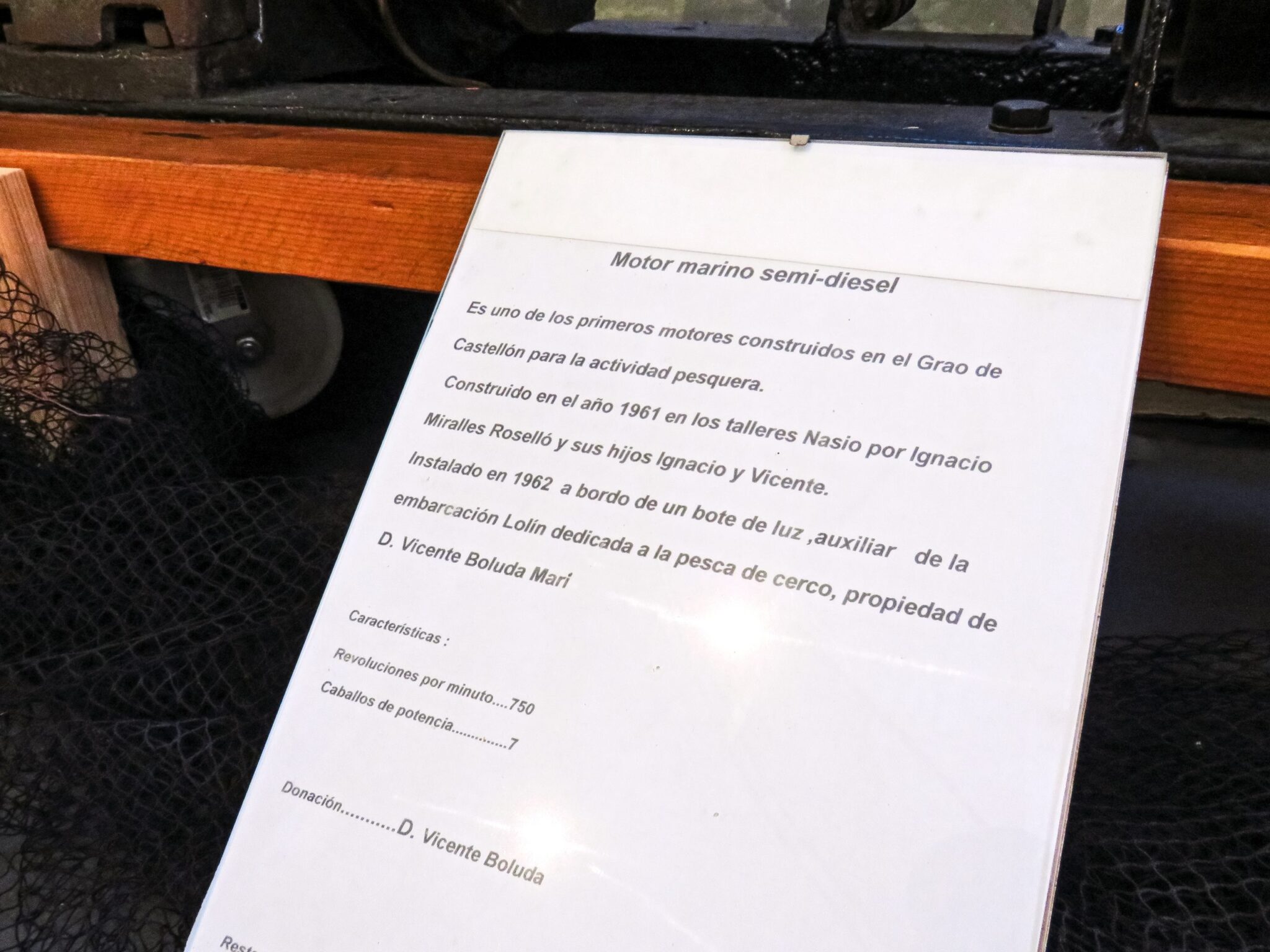 During the summer of 1963, Ignacio and his two sons traveled to Barcelona to visit the first edition of the Barcelona Boat Show and learn about the latest developments in the marine industry.

It was there where Ignacio Miralles (son) was particularly struck by an engine exposed in a stand that he had never seen before, a Cummins NTO 6-cylinder engine with about 180 hp. Ignacio went to the Cummins booth to talk to the representative and they both talked about engines and this American company that Ignacio had just discovered. Even today, when Ignacio tells us this story, his face lights up when he remembers the first time he saw that Cummins engine.

That same year, Vicente and Ignacio became Cummins official representatives, and Talleres Nasio became part of the Cummins Locations in Spain. This was the starting point from which the company began to be known along the entire Mediterranean coast.

During those years, many fishing boats were assembled and re-powered with those old Cummins engines, NH220, V12-500, NTA855 series… After many years of working with those engines, the new series of Cummins engines began to appear, such as the K19, being our workshop the one who assembled the first unit that was installed in our country. Then followed the VTA28 and the K38. 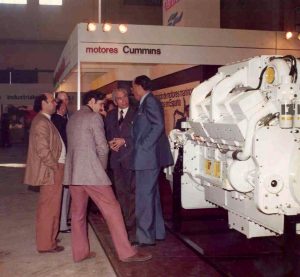 Miralles brothers, Ignacio and Vicente, at the Barcelona Boat Show, with the directors of Cummins sales and services of Spain, Mr. Miguel Angel Ivan and Mr. Castaño, at the presentation of the Cummins KTA38 950 Hp PT injection engine, first generation. The 70’s.

At the end of the 60’s, in 1967, the family bought from the “Parrac” a piece of land located in the current Almirante Cervera Street (behind San Pedro Church), and it was there where Talleres Nasio moved, and where the current workshop is still located. 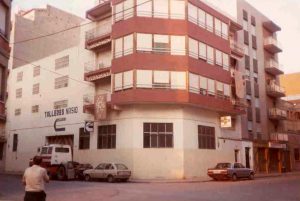 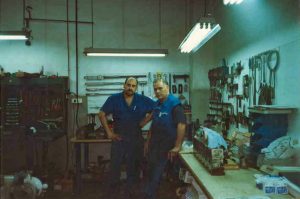 Vicente Miralles father and his son Vicente in Talleres Nasio, in the 90’s. 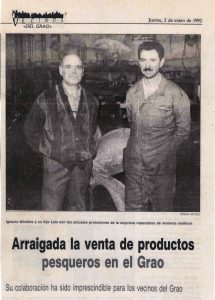 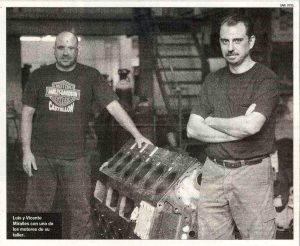 With the advent of the internet and the globalization of an increasingly connected market, our company decided to expand nationally with its first website. 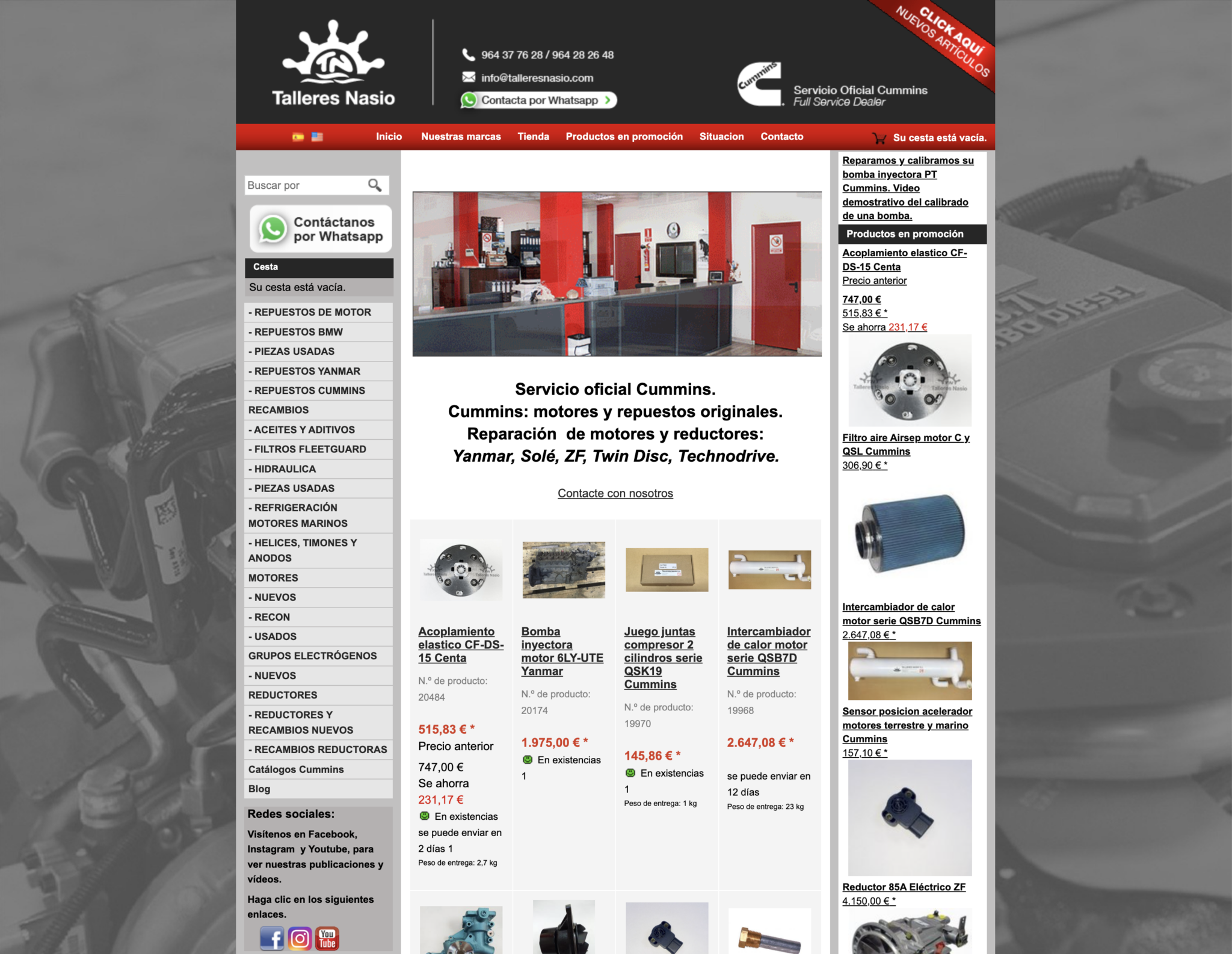 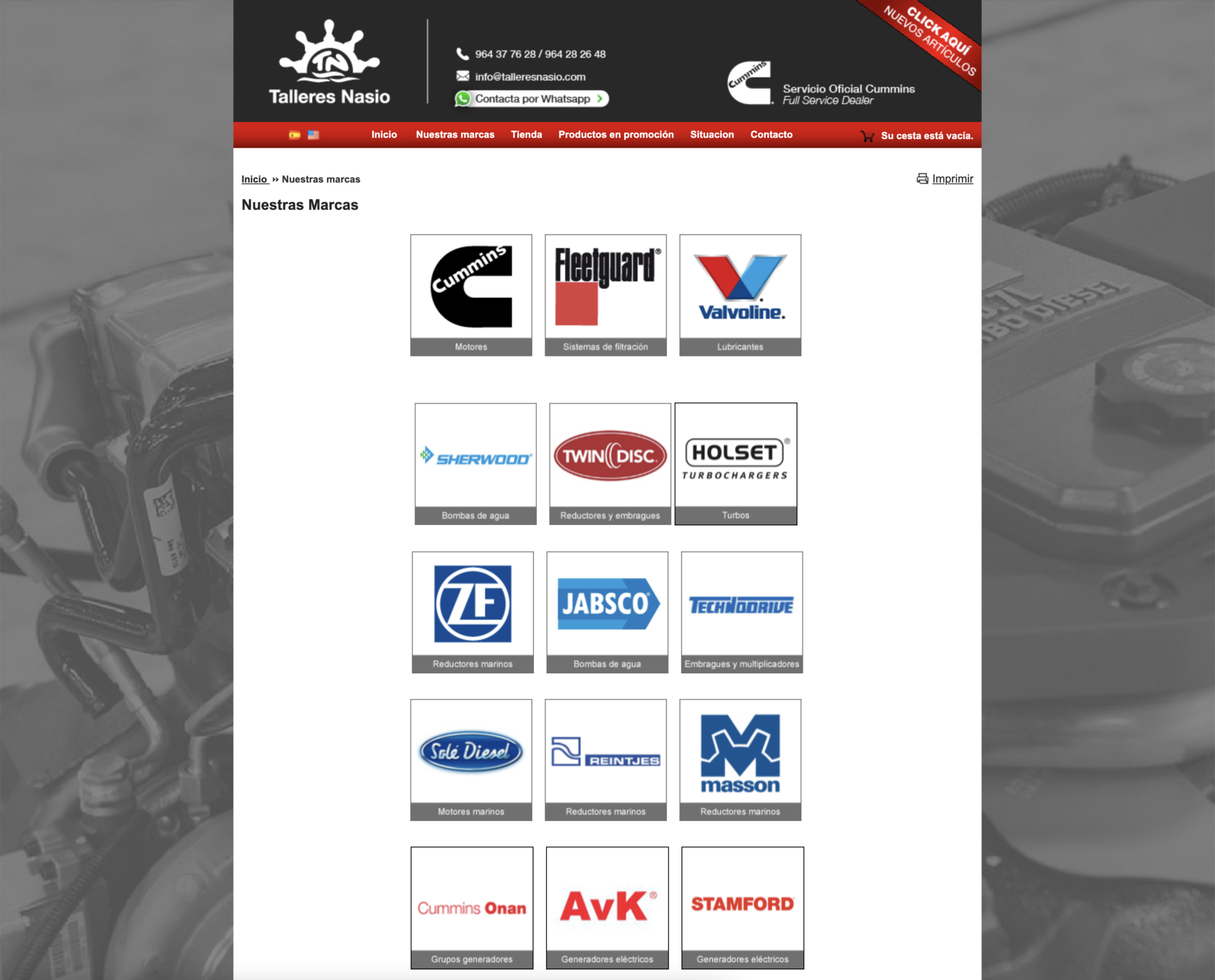 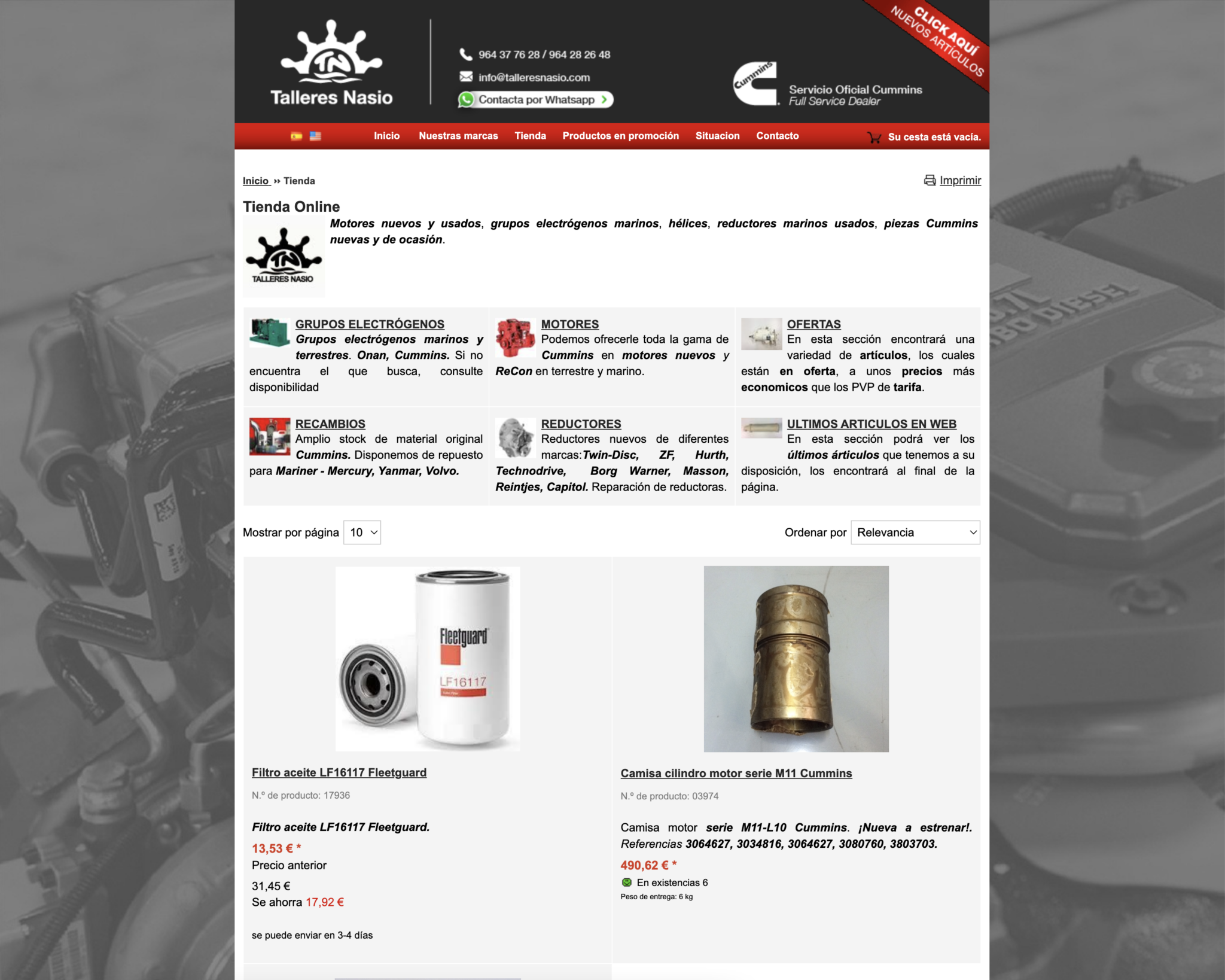 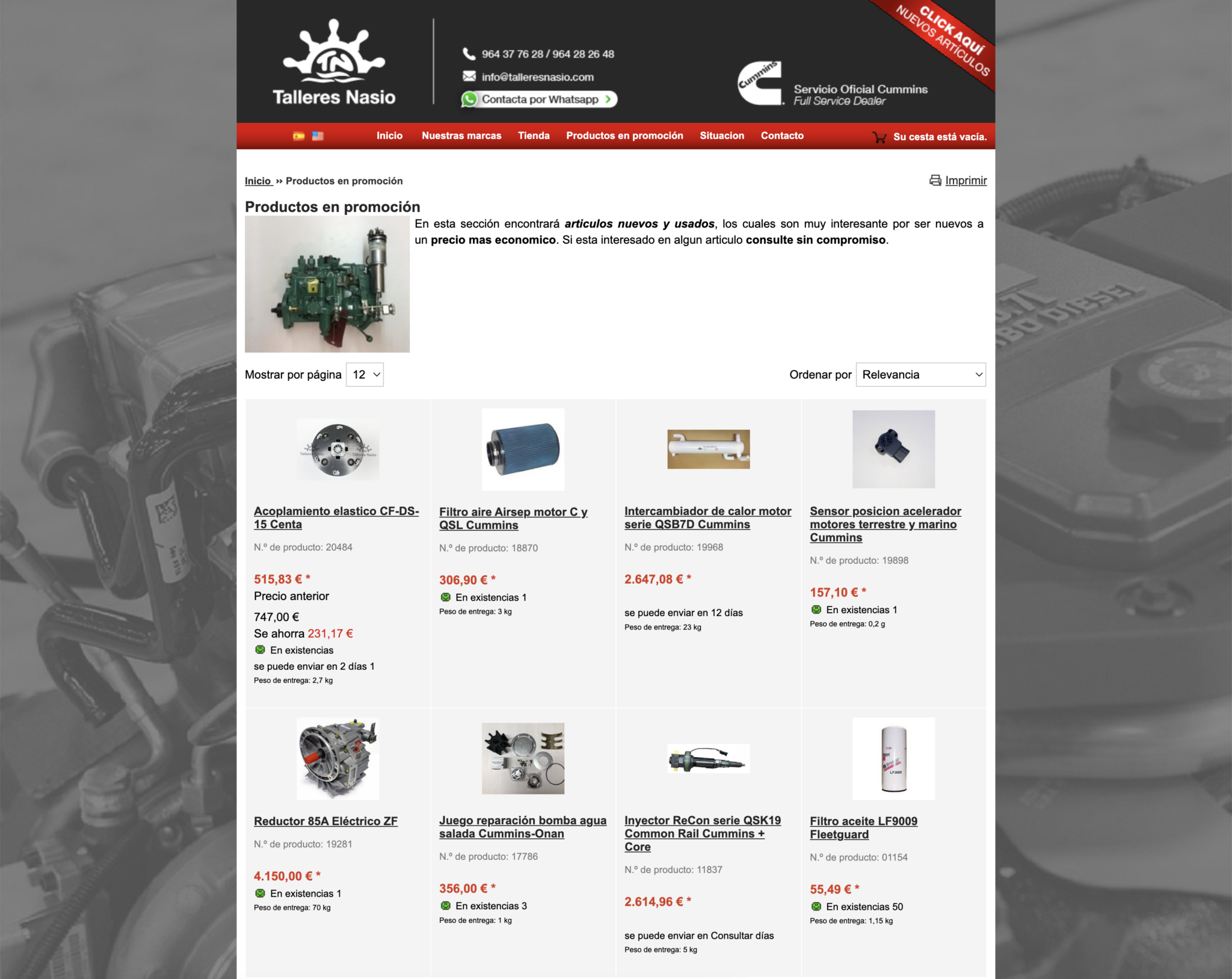 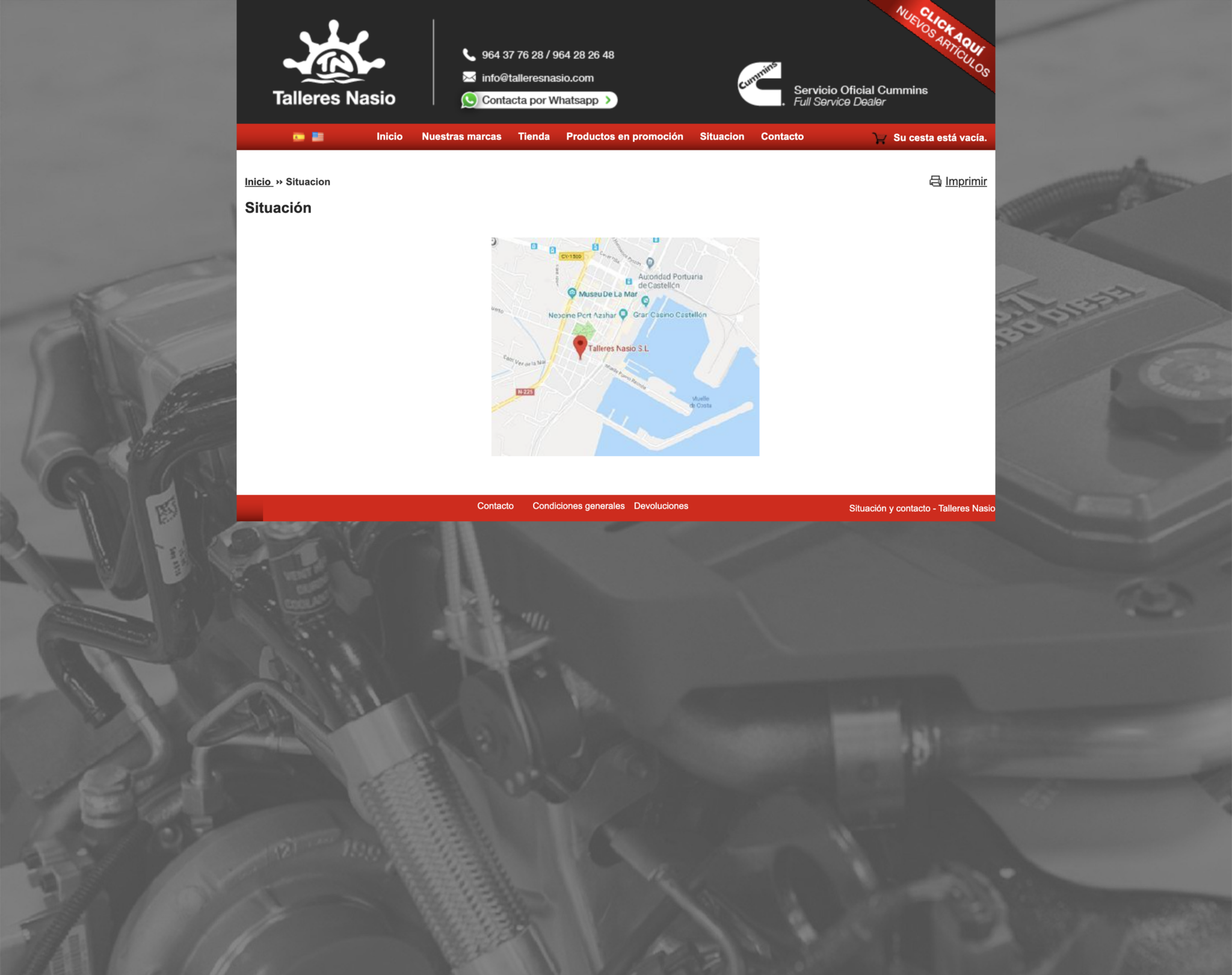 Thanks to this little technological advance, the company started to sell their products and services not only in our village, but also at a national and international level and to become known in other places where, if it had not been in this way, we would never have arrived.

Even today, Luis remembers when, 24 years ago he received one email in which a man from another part of Spain consulted him about a product he had seen on his web site. It was then that he realized the magnitude of what they were creating and how much they could achieve.

Through these years, our company has been growing and evolving, and now has customers in more than 35 different countries around the world.

We had customers in countries like: USA, Vietnam, Maldives, Morocco, South Africa, Chile, Peru, Brazil… And also in Europe of course like Portugal, The Netherlands or Denmark and others. 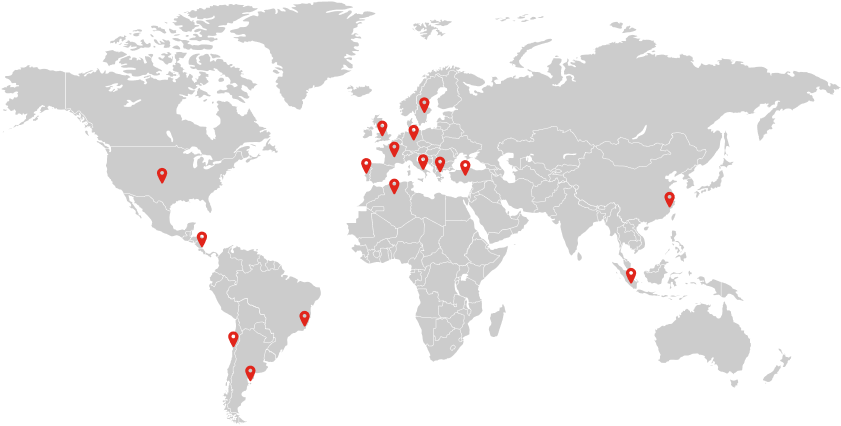 Today, 60 years after we started to be part of Cummins, we are the first distributor that existed in Spain and is still in operation.

Our integration as Cummins Official Service began with the repair and assembly of Cummins marine engines exclusively for professional vessels, but with the new generation of mechanics in the company, they opened up to new markets, with engines for public works, mining, construction, etc. Along with the sale of new, ReCon and used Cummins engines and original parts.

Our workshop is certified in most Cummins engines, and our managers Luis and Vicente are Official Cummins Certified Agents and Distributors. They have all the official courses carried out, both in Spain and in the factory in Daventry (England). We also have the official Cummins electronic diagnostic tools, Insite & Inpower, as well as all the manuals and access to the brand’s own programs. 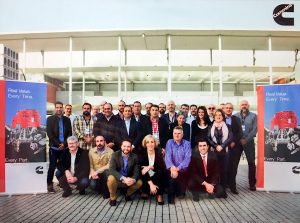 Vicente and Luis in a Cummins Spain Dealer Convention, in 2016.

Nowadays, we are no longer just a marine mechanical workshop dedicated to the repair of boats in the port. During these last years our workshop has grown and expanded covering the services of:

A company and a family dedicated to mechanics and the sea.

The history of our company is the story of a family that has dedicated itself with effort, passion and hard work to mechanics, the sea and its people.

It is a history of several decades and generations that have managed to maintain, evolve and prosper the family business with their feet in the ground, their eyes on the future, and always remembering the past, so as to never forget where we come from and what our roots are, those that have made us grow to where we are today. 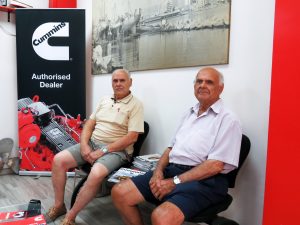 The brothers Ignacio (front) and Vicente (back), nowadays, in the offices of Talleres Nasio.